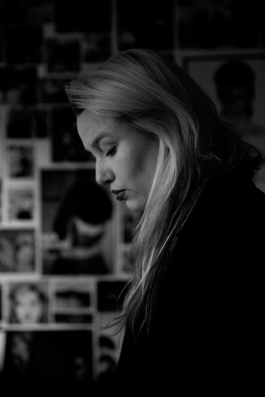 Loeka Horsman (1993) is a Dutch photographer and artist.

From an early age, Loeka has been obsessed with images and creating images. When she was around the age of five, she was given a Kodak Instamatic. This was the beginning of a “true love story”. With a stubborn look on the world, she shot picture after picture. She collected images from magazines, made collages, drew and painted a lot: she was always playing with images. But a camera.. that was it!

When she got a little older she started experimenting and developing her own style. In the meantime, she had swapped her Kodak Instamatic for other types of analog cameras and even a digital one! Friends around her decided to play in bands, become a model or tattoo artist or went head first into the art scene. This was perfect: Loeka captured them all on camera. Surrounded by inspiring people, Loeka's development as a photographer was encouraged.

Loeka studied photography in Amsterdam. But school, the system, was not really her thing: always the “rebellious dreamer”. After two attempts and a degree, she decided she was done. She had learned every all-round photography technique, so it was time to further develop her own ideas. Loeka then specialized in, what else?, portrait and documentary photography.

Capturing people in a pure and personal way is second nature to Loeka. She shows a piece of the soul, your personality.

She also captures the film-like scenes that she sees (always and everywhere) in this way. The locations, objects and therefore also people are photographed in this unique way, which always gives a poetic but pure, raw, powerful and somewhat melancholy image.